A video splitter is a device that takes one signal from a video source and replicates it over multiple monitors. The number of times that a video splitter divides the signal varies; video splitters currently on the market provide divisions for as few as two ports or as many as hundreds of ports.

Applications
Standard VGA video splitters can be effectively used in settings that require images to be replicated on several monitors. They are often used in classrooms, at tradeshow venues, in point-of-sale displays at retail stores, and in airports.

Resolution
Supported resolution is often as high as 1900×1200, assuming that the split monitors are not more than 20-30 feet away from the video source. If a monitor is extended past 20-30 feet, video degradation and ghosting may result. To mitigate this problem, some video splitters include a built-in signal booster, which allows the video signal to be extended up to 200 feet over a standard VGA cable. 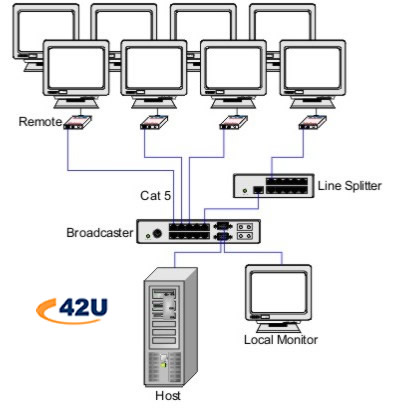